The dreaded CARBS…. Do they make you fat?

I have been on all sorts of diets over the years that have been prescribed to me from various coaches. I was made to believe for a long time that carbs are the enemy and I lived off a high protein, high fat diet. I now know that this was not good for me at all and hope that others do not make the same mistake that I did. I trusted my coach at the time but I do feel that if I had of continued on that path I would have ended up with all sorts of issues.

I have been eating my fair share of carbs lately being pregnant as that is what my body has been needing and I can tell you now I have NOT put on 20kg overnight. I am gaining weight slowly and healthily throughout my pregnancy due to my training not been as intense and I am obviously eating more of the bad carbs, which I am allowing myself to do GUILT FREE for once in my life 😉

You will hear it a lot these days that carbs make you fat!!!! The truth is that they can….but all you need to do is eat the right carbs at the right time and you will never store them as fat, in fact you will use them as fuel! 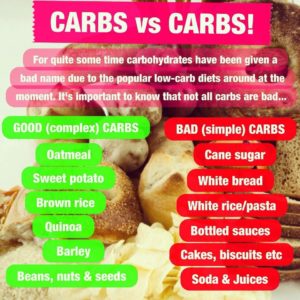 Here are 3 simple carb timing tricks that you can keep in mind so that you are not eating them at the wrong time and wondering why your belly isn’t budging and you are storing more fat than you would like to!

1) A good time to consume healthy carbs like non-processed  starches and fruits is first thing in the morning or upon waking.  This is because you have fasted all night while you sleep so your glycogen levels have been somewhat depleted and this leaves extra room for carbs to replenish lower glycogen stores without fat storage.   Also your metabolic rate runs at its highest during the morning  hours than it will later in the day so you’ll more likely use these carbs as  energy. Insulin sensitivity is also higher when you wake up than  other times of the day, which allows your body to utilize carbs and limit fat storage, this is especially effective if you exercise in the a.m.


2) An even better time to consume starches and fruits is a few hours before high intensity resistance training (bodyweight circuits, metabolic resistance  training, etc.) or a heavier weight training session.

3) The best time to consume carbs from starches and fruits is in your post workout anabolic window of opportunity, which is anywhere from 1 to 3 hours  after high intensity training.

Regardless if your goal is fat loss, strength, performance, energy, improved health or anything else, it’s critical for you to understand the process of food timing.

When you do, you’ll improve your insulin sensitivity dramatically, which will improve your body’s ability to burn ugly fat as fuel on a daily ongoing basis and who doesn’t want that?

These days I think it is crazy that some people will still put alcohol, drugs and toxins into their bodies but they won’t eat some sweet potato or eat fruit!!! This kind of mentality is warped and there is absolutely no logic to it!! This cartoon pic below made me laugh, maybe it isn’t heroin we are asking for ( I would hope) but you kind of get the message behind what I am trying to say. 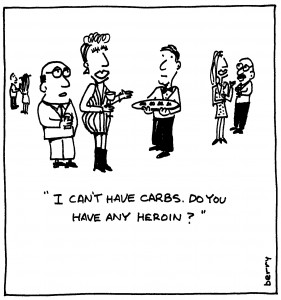 Educating yourself on the facts and allowing your body to fuel off the right foods will only benefit you in the long run and help you to live in an energy filled body that won’t burn out!

Be kind to your body, nourish it with the right foods at the right time and aim for a body that is healthy for life and not just lean for a week!!!

Lets all be happy little carb muncher’s together 🙂